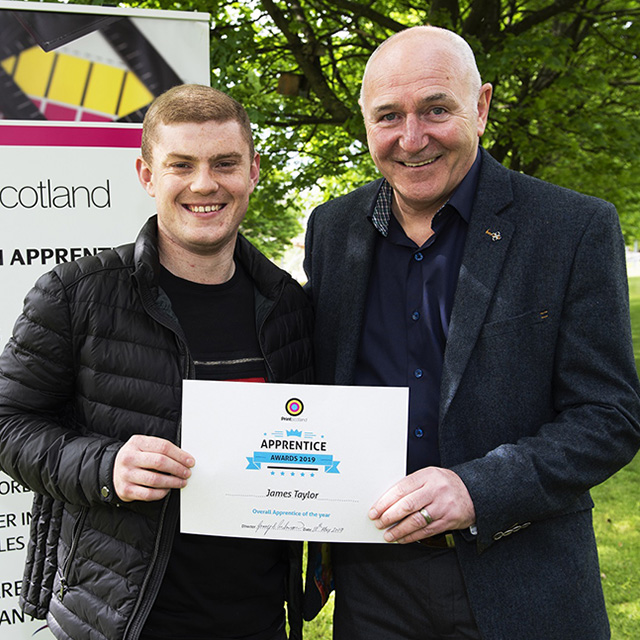 James Taylor, Apprentice of the Year 2019

James who grew up and still lives in Robroyston, attended Bishopbriggs Academy. He joined Bell & Bain three years ago after spells in the electrical engineering and retail sectors and now has ambitions to move into a business management role within the company. He said:

“I am very pleased that all the effort I have put into learning as much as possible about the printing trade has led to me being given this award. I am keen to continue adding to my skills and believe there is a very bright future for the print industry in Scotland.”

The award was sponsored by Antalis, HP, Muller Martini and Print Scotland and James was rewarded with an HP Laptop, £150 of Amazon vouchers and a winners award gift of £500 which was donated by Bell & Bain.

Print Scotland, the trade association and voice of Scotland’s graphic communication industry has been holding holds its Scottish Print Apprentice of the Year award for the last four years. The occasion is part of its mission to represent the Scottish print community and to highlight the profile of future leaders of the industry.

“James’s sterling efforts in getting to grips with the challenges of a rewarding career in print have been rightly rewarded. His family and friends can be very proud of his achievements. The print industry in Scotland is demonstrating slow but steady signs of growth year-on-year, and nowhere shows this more than in apprenticeships. Already this year our members have taken on 20% more apprentices than last year.”